My Life Stories 002| A Medicated Mess

Sadly, a lot of my life I’ve spent medicated both legally and illegally to calm me down or blank my brain to save my head from wandering. Causing me to become a medicated mess, this prompted me to make quite a few bad and silly choices in my life. including drug addictions to Legal Highs

Shortly after they diagnosed me with ADHD And Prescribed Ritalin or “methylphenidate hcl” although this allowed me to concentrate there were two main issues, like being zoned out. And the other is I stated struggling to sleep.

Of course, as a psychiatrist would; being paid by Big Pharma to offload their drugs at crazy high prices. I then got diagnosed with Insomnia and Prescribed with another medication called melatonin, but things only stared here.

they kept on prescribing me new drugs

Of course, as a psychiatrist would; being paid by Big Pharma to offload their drugs at crazy high prices. Someone then diagnosed me with Insomnia and off-loaded with another medication called melatonin, but things only stared here.

I got on with my life pretty fine without an incident until I was 9. there was a significant family incident that happened and “the thing” happened which changed my life. That’s when my sleeping patterns hit the roof again. And for the first time, mental health had become an issue of concern.

My sleep pattern was so bad they had prescribed a new drug… Risperidone this drug was to knock me out as after the incident I was not sleeping at all, in fact, I was passing out. From exhaustion very often… Risperidone, although it’s not its original use, certainly helped me fix my pattern, and I was on this for six months.

for many years later I then got prescribed on three different drugs for ADHD, Insomnia and Depression/Anxiety addicted and spiralling out of control I was a medicated mess

Image is Royalty Free from GDJ at PixaBay

Finally on April 30th, they pulled me into the CAMHS Centre In St. Peters For one of the last times. They presented me with my long-serving psychiatrist Dr Bertrand Laurence Nairac gave me a life-changing choice… and within 5 minutes I was now aware of my fate. I was now waiting for a bed to free up at an adolescent mental health hospital. (Read More -> sectioned Under the mental health act Aged 15 a brief before and the process of being admitted)

I spent three months in the hospital; I received therapy and being put back on risperidone for the time I was there.

after I got discharged aged 15, I made a massive decision in my life to withdraw from all medication it had been ten years that I was on these drugs and it was time for a change.

The conclusion is that although sometimes medication is excellent for people, but in my case medication was the devil; it caused many imbalances in my brain. Uppers Downers the lot… no wonder I was a medicated mess when the stupid doctors where shovelling pills down my throat and in reality all it did was numb my brain…

I somewhat blame this for my illegal drug and alcohol use later on in my life. it’s the only way I know how to cope with these thoughts and feelings, but this has got way better over the years as I mature in life.

After coming of Prescribed medication I had issues for the first 3 – 4 months readjusting and withdrawing from all those drugs… but after that, I was a different person. I was some.

Thanks for taking your time to read through this edition of My Life Stories. I spent a lot of time re-reading and proofreading this post. I understand that it’s still far from perfect, but I’m spending a lot of time trying to perfect my spellings grammar and punctuation.

Hi, My Name is Li Jean-Luc Harris and I am the founder of Looked After Child. I'm a care experienced person, who shares my real life stories about Mental Health, Being in foster care, addiction and homelessness growing up. and sharing everything I've overcome since then. I currently work as a support worker for Semi-Independence "Leaving Care" Placements as well as studying Residential Childcare Level 4. I'm also available as a motivational speaker and have already spoken at events for care professionals and mental health professionals promoting better care and mental health to young adults. Check Out Looked After Child's Events 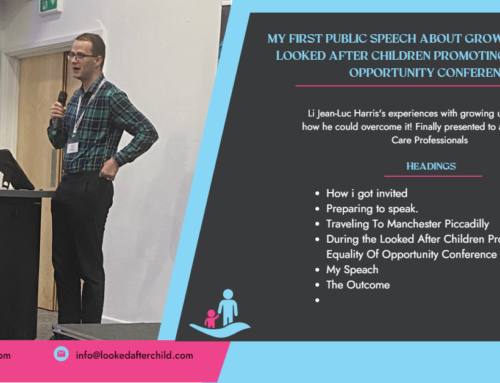 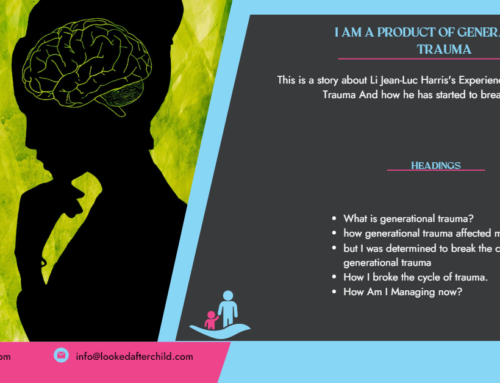 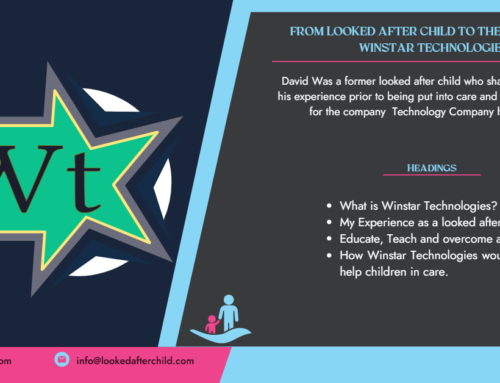 Epilepsy Safe Mode
Dampens color and removes blinks
This mode enables people with epilepsy to use the website safely by eliminating the risk of seizures that result from flashing or blinking animations and risky color combinations.
Visually Impaired Mode
Improves website's visuals
This mode adjusts the website for the convenience of users with visual impairments such as Degrading Eyesight, Tunnel Vision, Cataract, Glaucoma, and others.
Cognitive Disability Mode
Helps to focus on specific content
This mode provides different assistive options to help users with cognitive impairments such as Dyslexia, Autism, CVA, and others, to focus on the essential elements of the website more easily.
ADHD Friendly Mode
Reduces distractions and improve focus
This mode helps users with ADHD and Neurodevelopmental disorders to read, browse, and focus on the main website elements more easily while significantly reducing distractions.
Blindness Mode
Allows using the site with your screen-reader
This mode configures the website to be compatible with screen-readers such as JAWS, NVDA, VoiceOver, and TalkBack. A screen-reader is software for blind users that is installed on a computer and smartphone, and websites must be compatible with it.

We firmly believe that the internet should be available and accessible to anyone, and are committed to providing a website that is accessible to the widest possible audience, regardless of circumstance and ability.

To fulfill this, we aim to adhere as strictly as possible to the World Wide Web Consortium’s (W3C) Web Content Accessibility Guidelines 2.1 (WCAG 2.1) at the AA level. These guidelines explain how to make web content accessible to people with a wide array of disabilities. Complying with those guidelines helps us ensure that the website is accessible to all people: blind people, people with motor impairments, visual impairment, cognitive disabilities, and more.

This website utilizes various technologies that are meant to make it as accessible as possible at all times. We utilize an accessibility interface that allows persons with specific disabilities to adjust the website’s UI (user interface) and design it to their personal needs.

Additionally, the website utilizes an AI-based application that runs in the background and optimizes its accessibility level constantly. This application remediates the website’s HTML, adapts Its functionality and behavior for screen-readers used by the blind users, and for keyboard functions used by individuals with motor impairments.

If you’ve found a malfunction or have ideas for improvement, we’ll be happy to hear from you. You can reach out to the website’s operators by using the following email

Our website implements the ARIA attributes (Accessible Rich Internet Applications) technique, alongside various different behavioral changes, to ensure blind users visiting with screen-readers are able to read, comprehend, and enjoy the website’s functions. As soon as a user with a screen-reader enters your site, they immediately receive a prompt to enter the Screen-Reader Profile so they can browse and operate your site effectively. Here’s how our website covers some of the most important screen-reader requirements, alongside console screenshots of code examples:

We aim to support the widest array of browsers and assistive technologies as possible, so our users can choose the best fitting tools for them, with as few limitations as possible. Therefore, we have worked very hard to be able to support all major systems that comprise over 95% of the user market share including Google Chrome, Mozilla Firefox, Apple Safari, Opera and Microsoft Edge, JAWS and NVDA (screen readers), both for Windows and for MAC users.

Despite our very best efforts to allow anybody to adjust the website to their needs, there may still be pages or sections that are not fully accessible, are in the process of becoming accessible, or are lacking an adequate technological solution to make them accessible. Still, we are continually improving our accessibility, adding, updating and improving its options and features, and developing and adopting new technologies. All this is meant to reach the optimal level of accessibility, following technological advancements. For any assistance, please reach out to

Decide which cookies you want to allow. You can change these settings at any time. However, this can result in some functions no longer being available. For information on deleting the cookies, please consult your browser’s help function. Learn more about the cookies we use.
Under the E-Privacy Regulations Tracking is enabled by default. and its purpose is only used for improving the website and tracking audiance, please check out Site Tracking - Privacy Policy - Looked After Child To find out more information on how we collect your data, and how its stored as well as options to Opt out

With the slider, you can enable or disable different types of cookies:

Save & Close
X
Go to Top